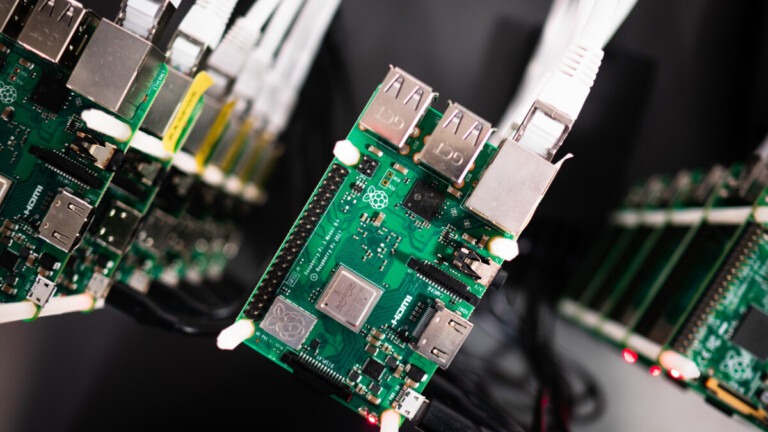 Raspberry Pi are often the gateway device for developers first getting into tinkering with an IoT project. These single-board computers are relatively inexpensive, easy to get started with, and compatible with a variety of different sensors. Configuring these devices is so quick and easy that the Raspberry Pi has even become a popular choice for schools hoping to train the next generation of developers.

With the configuration process being quick and relatively simple, the product widely available, and the cost per unit fairly reasonable, many project architects have asked themselves, “Are Raspberry Pis scalable enough to utilize on a widespread IoT deployment?”

The Case for Raspberry Pi

As far as compact IoT devices go, the Raspberry Pi has a lot of positive attributes. As previously mentioned, they are an affordable way to get started with IoT and boast a surprisingly capable processing power for their size. This is why understanding the specific requirements of your fleet of devices is an essential element of an IoT project’s total cost of ownership. In scenarios that would require the kind of power that an RPI possesses, it could be a valuable tool. Conversely, if the task it is needing to perform is simpler, then it may be excessive for that purpose.

A concern with most IoT projects is power consumption, and as the Raspberry Pi is only a single-board computer, it uses relatively little power. This can make it an attractive option for larger fleets, as devices with greater power demands will need to be replaced more frequently, potentially leading to costly downtime.

There’s also something to be said about the versatility of the Raspberry Pi, as its General Purpose Input Output pins allow direct access to the input/output circuitry of the computer. This means sensors and other components can directly interact with the Raspberry Pi, better integrating those components into the system and potentially making the device central to your project.

Of course, a more prominent benefit of using only the RPi for scaling your IoT project is that utilizing only one kind of device means you won’t have to worry about the varying factors that may exist if you need to source devices from multiple vendors. Having a consistent component that is reliable and repeatable can make scaling so much simpler.

The Challenges of Raspberry Pi

Looking at a Raspberry Pi from this perspective, it seems like an excellent option for a small IoT deployment. Yet there are some clear challenges that emerge when hoping to utilize the device at a larger scale.

Raspberry Pi requires a basic OS to be installed on each individual device, and loading this OS onto a fleet of thousands of devices can be a tedious task. There are ways to create a slightly more streamlined process for provisioning the device, but it can still be cumbersome.

Though we also listed it as a strength, it must be acknowledged that the Raspberry Pi is perhaps overpowered for very basic tasks. Depending on your project’s objective, there may be a more specialized device that can more efficiently perform that specific task. Would an Arduino or similar microcontroller be better suited for your task? Do you or your team have the expertise to deploy other devices more efficiently? For example, if your deployment is intending on tracking GPS coordinates, utilizing a prebuilt GPS tracking device would make more sense than programming a Raspberry Pi and attaching a GPS tracker to it.

From a security perspective, Raspberry PI are built with the intention of being ‘hacked.’ If you are playing with the device in a test environment, this is likely not an issue. When deployed out in the real world, however, there are myriad security concerns that make a Raspberry Pi vulnerable. A simple Google search yields plenty of results for how to hack an RPi, creating serious concerns about rolling out a wide-scale consumer application built around these devices.

There is also the complication of connectivity. RPi have ethernet ports for a hardwired connection and support WiFi, but what if the device is positioned in a location where there is no access to either? Then there is the need for external dongles for cellular connections marking an extra piece of hardware to worry about.

Ultimately when it boils down to scalability for an IoT deployment, what you need is the ability to roll out your devices as quickly and securely as possible in a reproducible format. On a small scale of 10 devices or less, it is very feasible that a Raspberry Pi rollout could be an affordable option. However, in a large or enterprise-level rollout, there are enough logistical challenges to make the RPI an impractical option. In most scenarios, locating and testing a specialized device with suitable connectivity options is probably a more realistic approach to scaling up an IoT application.