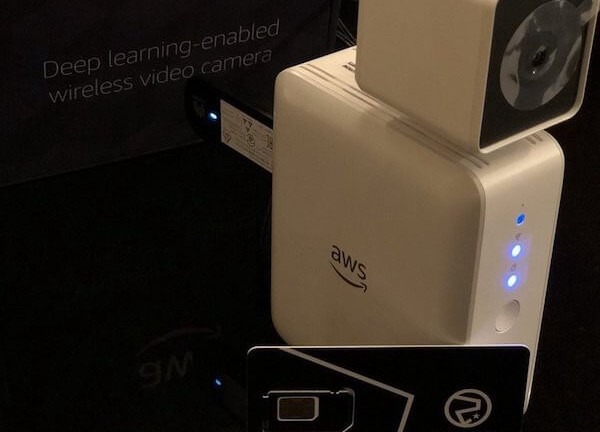 AWS DeepLens was first announced at AWS re:Invent 2017, and it’s been a long 6 months of waiting, but shipping day is here at last. Here at Soracom that means at least half the team is obsessively checking tracking updates and canceling weekend plans.

For those new to DeepLens, it’s a lot more than just a camera. It starts with the hardware, but AWS has packed in a complete Deep Learning toolkit, giving developers a fully programmable device plus the tutorials, sample code, and pre-trained models to hit the ground running. With object detection, face detection, activity detection and true Hot Dog/Not Hot Dog capability, DeepLens makes getting hands-on with Deep Learning easy and honestly really fun.

Since a lot of the fun happens out in the world where WiFi may not be accessible, we’re eager to see what we can do when we take DeepLens mobile by enabling cellular connectivity.

Fortunately, Soracom CTO and co-founder Kenta Yasukawa was able to get his hands on DeepLens early to show us how. (And just like AWS, it’s pay-as-you-go, so this example costs just a few cents a day.)

This is the AWS DeepLens device. It has a built-in camera and GPU, WiFi and USB ports, and runs Ubuntu Linux. It ships with the AWS Greengrass service and a configuration tool for self-registration with the AWS DeepLens service. (You can learn more about all that here: https://aws.amazon.com/deeplens/)

There are a bunch of sample, pre-trained models provided, along with sample projects using the models. Once you configure the device to connect to WiFi and register it to your AWS account, you can just pick a project, deploy to the device, and get rolling.

In my case, Object Detection reported a personand a tvmonitorwith 92% and 44% probabilities, respectively. That means my e-body could fool their model into recognizing me as a human being. Score!

As Werner Vogels emphasized in his Day 2 keynote at re:Invent 2017, this has always been the core philosophy of AWS. Working with DeepLens, I feel that AWS is opening the door to let developers dive into a new world, just as they did by making infrastructure available for software engineers to control via API.

1. First, we ask the OS to detect the USB device as a modem. With the Huawei MS2131 that I used here, an appropriate driver is already included in Ubuntu Linux running on DeepLens. We just need to run the following command to let the OS recognize the dongle as a modem rather than a mass storage device.

(12d1 is for Huawei, 14fe is the product code for MS2131 and -J is for running Huawei specific procedure. You may need to find right values for your modem.)

!! It got a new interface that corresponds to the cellular link. Now it has dual links to reach to AWS IoT endpoint, one is wifi (

) and the other is cellular link with SORACOM Air (

To emulate a situation where WiFi coverage is not available, I typed

on my console to kill my local WiFi connection.

For example, SORACOM Endorse issues a digital certificate that assures a client has a particular combination of IMSI (identity inside SIM) and IMEI (identity unique to each modem) so you can authenticate a device. SORACOM Beam proxies requests from a device to your server, adding the device’s IMSI and IMEI to the headers.

If you’d like to learn more about Soracom and IoT in general or otherwise come test out code with us, please feel free to join our online community at https://community.soracom.io/