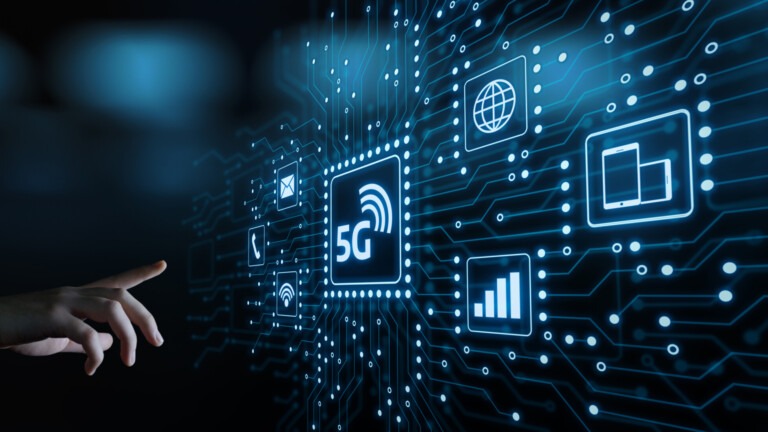 5G connectivity has become a cornerstone of marketing for the telecom industry, a key talking point for the future of IoT, and a buzzword for the future of connected technologies across the board. Yet while 5G holds the potential to revolutionize the way our devices connect to the internet and has been commercially available since 2019, the technology has not yet taken off the way many had predicted.

Yes, adoption is on the rise as the 3G sunset continues, but not to the levels that many analysts had predicted. This is a technology with vast potential being embraced by many telcos and consumers, yet 5G currently represents only about 8% of the world’s global mobile connections.

Why aren’t we not yet seeing a bigger push for applications like 5G IoT? To understand the challenges faced by this emerging technology, let us first look at what it actually is.

The term 5G refers to the fifth-generation standard for the broadband cellular networks that connect all of our devices, including phones and tablets, to voice and data networks. Essentially data is transmitted from one place to another via higher radio frequencies (28ghz vs the 700-2500 MHz of 4G), effectively allowing greater amounts of data to be transmitted at faster speeds with lower latency.

As the first cellular networking standard to operate on the millimeter wave spectrum, 5G represents a major departure from previous standards like 3G and 4G or LTE. Millimeter wave allows roughly 250x the number of devices to connect within a square kilometer than the previous generation’s standard (around 1 million connections compared to 4000 under 4G). The technology had previously been limited to satellite and radar systems employed by the military, but the growing ubiquity of mobile connections has seen the technology move into commercially available mobile networks.

Another feature unique to 5G is the introduction of Massive MIMO (Multiple Input Multiple Output) systems, which uses multiple targeted beams to follow individual users within a coverage area to ensure stronger, faster connections at a greater capacity.

What Are the Challenges for 5G Adoption?

While this all makes 5G sound like a no-brainer for data-centric applications like IoT, there are several challenges that have slowed the adoption of this new connectivity solution.

For one, the millimeter wave spectrum that allows 5G to support so many devices within a coverage area does so by operating off of shorter wavelengths. Frequencies of 24GHz and beyond, which high-band 5G fall under, have a broadcast range of only 300-500 feet from the base station. This means that the device needs to be closer to the source of the signal and that obstacles like walls or trees could potentially limit signal strength.

The high frequency also makes millimeter waves more susceptible to atmospheric conditions such as inclement weather or even airborne gasses that can absorb the waves before they reach a device.

This means that to deploy 5G, mobile network operators must deploy more physical “towers” in an area to ensure thorough coverage. This presents a number of logistical challenges for adoption. For one, the financial requirements of all the equipment needed to support such a deployment are considerable. One must also consider the difficulty in placing these installations in rural and remote areas, where antennas and towers may enjoy less camouflage.

Are There Ways Around the Millimeter Wave Issue?

To get around the issues with the millimeter wave spectrum and make connectivity more consistent over wider areas, many carriers have introduced what is called “Low-Band 5G.” These systems tend to operate on frequencies below a gig, making for more consistent coverage even within buildings and in inclement weather, but with speeds comparable to 4G LTE rather than the super-charged connectivity promised by the 5G name. Also dubbed the “coverage layer,” low-band 5G is currently the most widely available form of this technology, and the basis of most 5G IoT installations today.

In an effort to increase coverage speeds while mitigating some of the risks inherent in higher frequency bands, MNOs have also deployed Mid-band 5G, which operates on frequencies between 1 and 6 GHz. Mid-band 5G base stations can transmit and receive high-capacity signals over a reasonably wide area, making it a more attractive option for some users. Of course, this form would also require necessary upgrades to existing equipment, though some carriers are retrofitting existing 3G and 4G infrastructure to support this.

What is the State of 5G today?

The end result is indeed a notable improvement in speed. A recent RootMetrics review of the three major carriers in North America found that the average 5G download speeds were, at times, twice as fast as their 4G offerings. Of course, a further study performed by the Washington Post found the performance and reliability of 5G coverage to vary quite wildly from location to location, despite claims from the major telcos of nationwide coverage.

The issue is that spectrums are limited. Currently, the major Telcos employ a technology called Dynamic Spectrum Sharing, which sees 5G operate on the same spectrum as 4G. This is useful in the sense that it allows companies to operate both network frequencies at the same time but places a heavy burden on the bandwidth that can lead to performance issues and slowdown.

“It’s kind of like having that super fast sports car and you’re stuck on the Santa Monica freeway,” Michael Thelander, president and founder of Signals Research Group told the Verge. “You can’t experience the full capabilities.”

Given the current limitations of commercially available 5G, its potential to revolutionize data-heavy IoT applications like autonomous vehicles and remote healthcare may still be a bit out of reach. With time and considerable investment from Telcos and government agencies, 5G could potentially reshape the connectivity world, replacing even ISPs for commercial and residential internet connections.

Yet the challenges listed above, as well as the power constraints placed on a device operating on a high band connection and the cost and size of the average modem capable of supporting such connections, mean 5G is currently not in a position to support IoT deployments consistently at this point in time.