The Founding of Soracom – How the IoT Company Came To Be 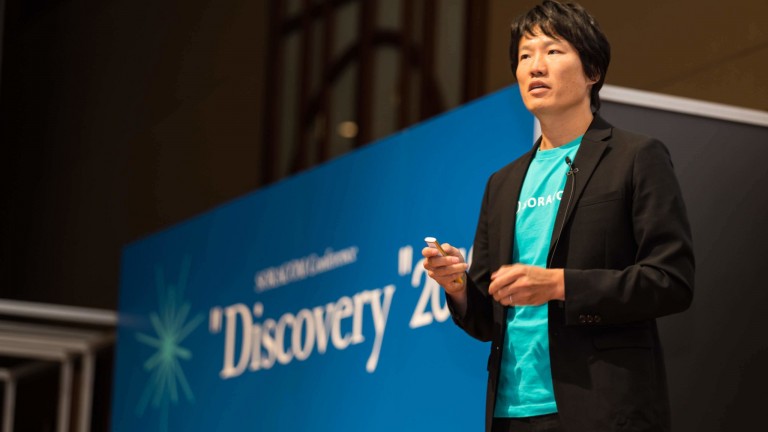 Why would anyone walk away from the resources and opportunities of a billion-dollar enterprise to pursue a personal vision? Soracom founder and CEO Ken Tamagawa sat down with Tim Romero of Disrupting Japan for a wide-ranging discussion of IoT technology, emerging use cases, the mission of a founder, and the experience of building a global business by empowering developers and getting out of the way.

The Founding of an IoT Company

Tim: Let’s talk a bit about you. So, we first met back when you were working at AWS.

Tim: I was at Engine Yard. Times change.

Tim: Before you did AWS, you went to the University of Tokyo and you got an advanced degree in the US. What made you wanted to start a company? Was this something you always wanted to do?

Tim: We have time.

Ken: So, let me talk about my career background. I graduated from Tokyo University with a Master’s degree in Mechanical Engineering and also the Bachelor’s degree. I started my career at IBM Research. The first research project I was working on was a smart watch, wearable computing project. It was the most cutting edge product in IBM research at the time. It had an accelerometer, fingerprint sensor, —

Tim: They couldn’t bring it to market at a price that they could sell it?

Ken: Yeah. One day, my boss assembled us to announce this project is canceled. [LAUGH] It was surprising for me and in retrospect, the IBM management team had decided to sell ThinkPad to Lenovo. Our project was funded by the ThinkPad team. So, naturally, our project was canceled. We lost the research fund. But, that experience taught me, if I want to bring our product to the market, I need to know more about the management, sales, and marketing.

So, I moved to the sales division and worked on the software. And then, I got a company scholarship from IBM and went to Carnegie Mellon to work on my MBA and MSE — Master of Software Engineering. That was 2006. In that same year, Amazon started AWS.

A friend started using AWS while I was in the US, and it was amazing. When I first touched AWS, that was incredible. You just click a button and then you can get or take a server instantly. I felt like the world was changing. But I was sponsored by IBM and so I needed to go back to Japan. So, I went back to Japan and I think I worked in the software group for two years and then one day, I got a call from a headhunter. He told me “Amazon is going to start the AWS business in Japan. Why don’t you start that business?” Oh my God! I wanted to do that. There was a catch though: I had a contract with IBM, if I left the company within 5 years of my graduation, I had to pay back all of the tuition.

Tim: Sure, because they paid for all the college and everything.

Ken: But I paid that money to IBM to join the AWS.

Tim: So, you really do believe in this AWS vision?

Ken: Yeah, because I really like the way AWS democratizes computing resources. I was very fortunate; I was in IBM research. For me, it was easy to get access to supercomputing resources. But most people don’t have a way to use those technologies. AWS democratized computing resources. So, if you as a developer have a good idea, you can launch servers quickly and then start it. It’s already like a small startup. Naturally, many, many innovative start-ups quickly demonstrated the power of this concept. Mainly startups from the US, like Dropbox, Instagram, Uber, Airbnb… many, many technology start-ups.

Tim: I think AWS really made it easy for startups… it decreased the cost of starting a company. [Instead of setting up a server installation] you could try it and see for $100.

Ken: Right. So, I already like the nature of AWS Business, it’s kind empowering, developing for people, so I put all my effort into the AWS business. I joined AWS as technical evangelist. I think I delivered more than 160 presentations in 2011. Every day, I give a speech…

Ken: Luckily, right now the AWS business in Japan expanded successfully. I guess the yearly revenue is beyond 1 billion USD in Japan. So, that’s amazing, right? Within 6 years! But, unfortunately, there is no big start-up from Japan using AWS, going global, delivering very technically innovative products or services. No, right? I think that really is bad, because I was a technical evangelist and that’s kind of my job to create innovative start-ups.

Then, one day, I had a beer with the current CTO in Seattle, because we had a business trip to Seattle. We were very excited to talk about what kind of a mission-critical IoT system can land on the AWS. One of the interesting ideas was running a mission-critical telecom network on the AWS Cloud. We felt maybe we can make it, but most people don’t think so. So that is really a big opportunity. I went back to my hotel, and I had some jet lag so I made a fictitious press release saying, “We built a Telecom Call Network in software on the AWS Cloud to provide very inexpensive, open, pay as you go connectivity.”

Tim: So, your imaginary Press Release.

Ken: The next morning, I woke up and read the release, and it didn’t seem so fictional. [LAUGH] So, that’s the beginning of Soracom.

Tim: Okay. But your background is in technical research. You had the expertise of teaching people about the correct architecture on a cloud. So, I can understand that from an engineering point of view, you’re seeing the opportunity. But up to this point, your whole career has been working in very large companies. What made you decide to actually go out and start this company?

Ken: Well, I don’t know the reason, but you are right. I’m a researcher in the enterprise company. Then, as an evangelist at AWS I shared my passion for the technology with the technical community, wanting to see something very large grow. But nobody else was making an IoT company like Soracom. So I realized I needed to do that, right? That’s the thing.

Ken: Yeah, this is very interesting. In Japan, after I founded the Soracom, I would say like more than 90% of people, like a first question– “Your wife is okay?”

Ken: So, that’s the code ‘Wife block” in Japan. Actually, my wife is kind of very supportive. “If you want to do it, just do it. Right?” I am kind of very appreciative.