On February 7, 2017, we held the SORACOM LoRa Conference in Tokyo, and with that keynote, we have introduced a lot of new services, all focused on creating more reach and access for IoT developers.

First, what is LoRaWAN? 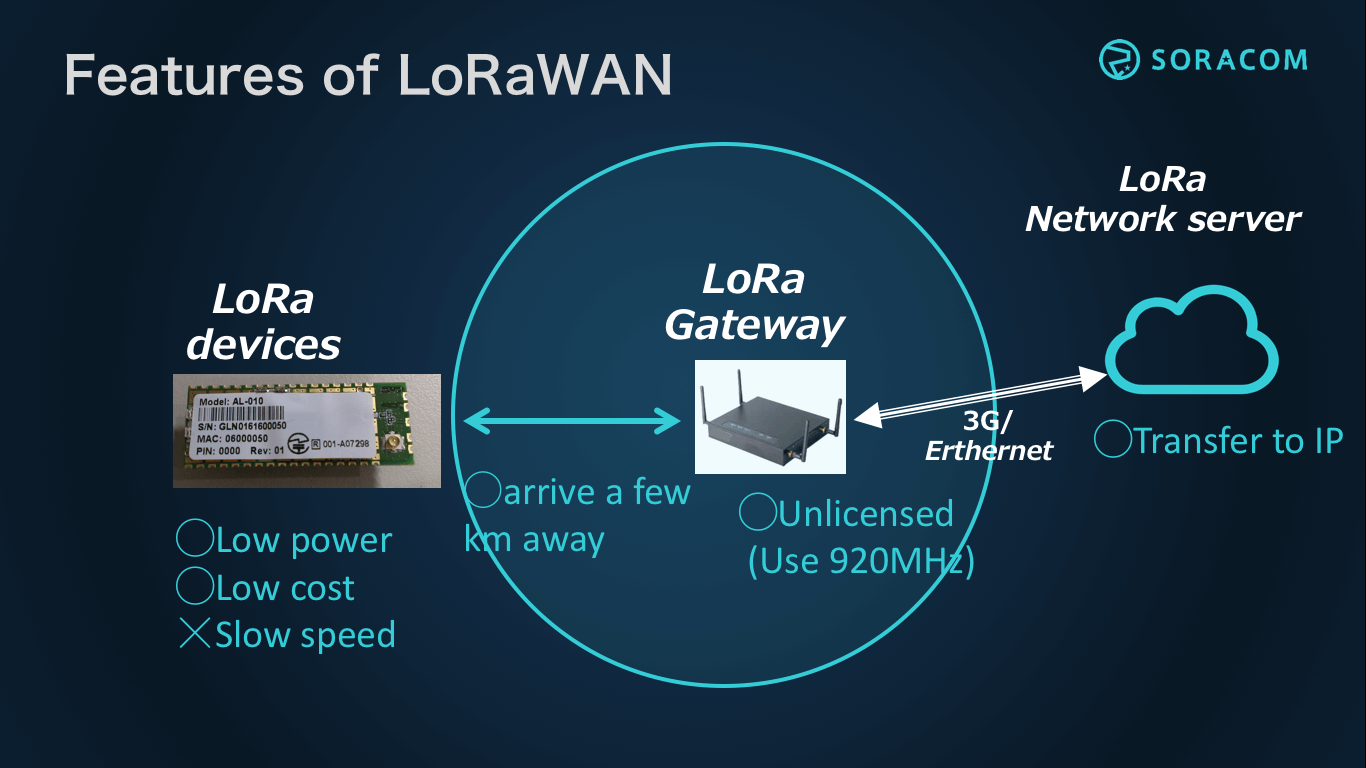 LoRaWAN™ is a wireless communication standard called LPWA (Low Power Wide Area Network). Since it uses the unlicensed subgiga band (920 MHz band), it allows data transmission over very long distances, even in congested urban areas. For example, five LoRaWAN gateways could cover all of Hachioji City in Tokyo. In addition, LoRaWAN’s low power consumption can significantly reduce the burden device-side power supplies, supporting battery life of several years or more for connected devices. The module can also be expected to be miniaturized, and it can be manufactured at a price of less than several hundred yen (less than $5) in the future.

Although it has the disadvantage of limited communication speed, sending 11 bytes only once in several seconds, LoRaWAN is attracting a lot of attention as a bearer for IoT’s last mile.

SORACOM and LoRaWAN so far

In May 2016, SORACOM invested in M2B Communications, established a strategic business alliance, and announced entry into the telecommunications business using LoRaWAN. In addition, to facilitate the LoRa demonstration experiment, in July 2016 we began selling a LoRa module and gateway, as well as package including various setups and consulting, as a LoRaWAN PoC kit.

Announcement of SORACOM Air for LoRaWAN

As of February 7, SORACOM Air, which provides data communication for IoT, has been extended in Japan to now provide full support for LoRaWAN. 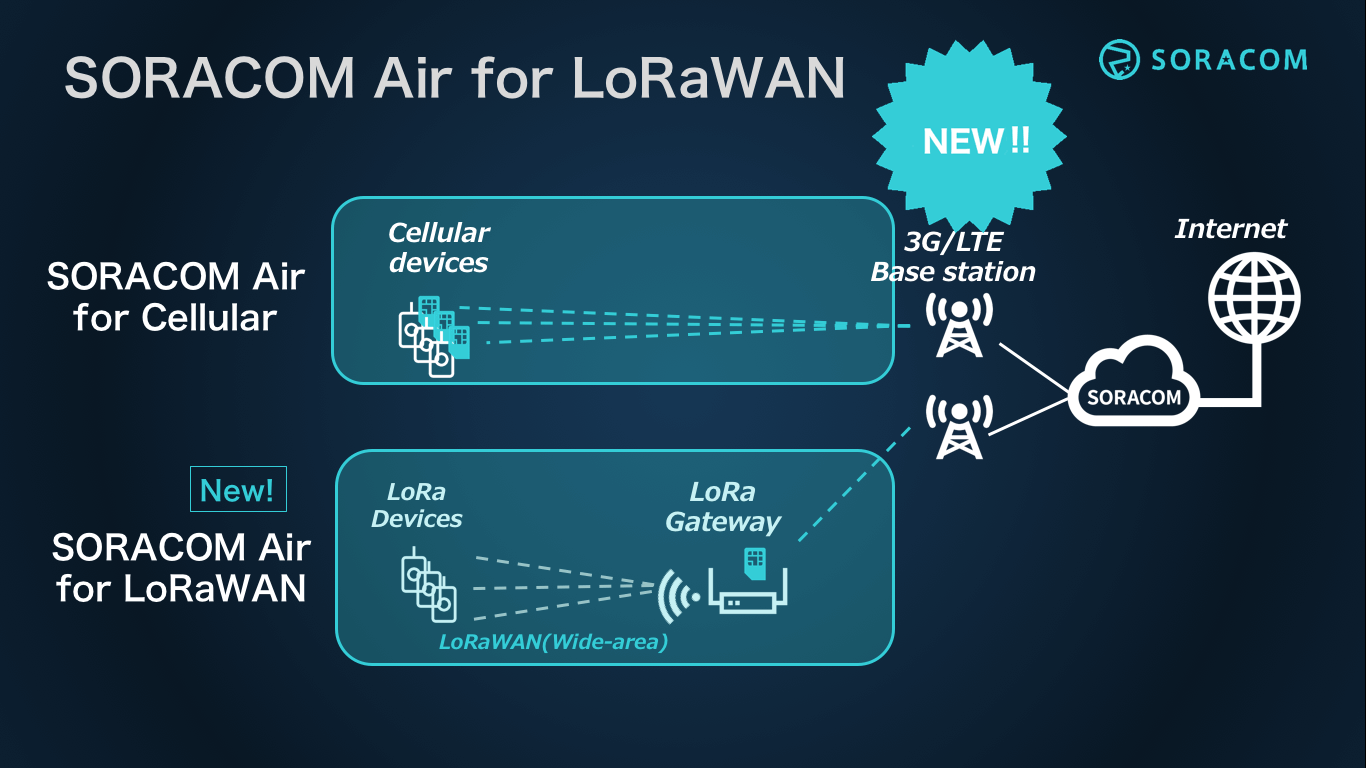 SORACOM Air, which offers SIM cards and 3G / LTE cellular data communication, will become SORACOM Air for Cellular, and our newly-launched LoRaWAN service will be offered as SORACOM Air for LoRaWAN.

Users in Japan will be able to use the SORACOM web console and APIs not only to manage SIM cards but also to manage and configure LoRa devices.

It is cool that you can also control the LoRa device!

As the first step of the gateway, LoRa indoor gateway is now on sale. A 3G dongle is attached, so it can be installed anywhere and connect by cellular. 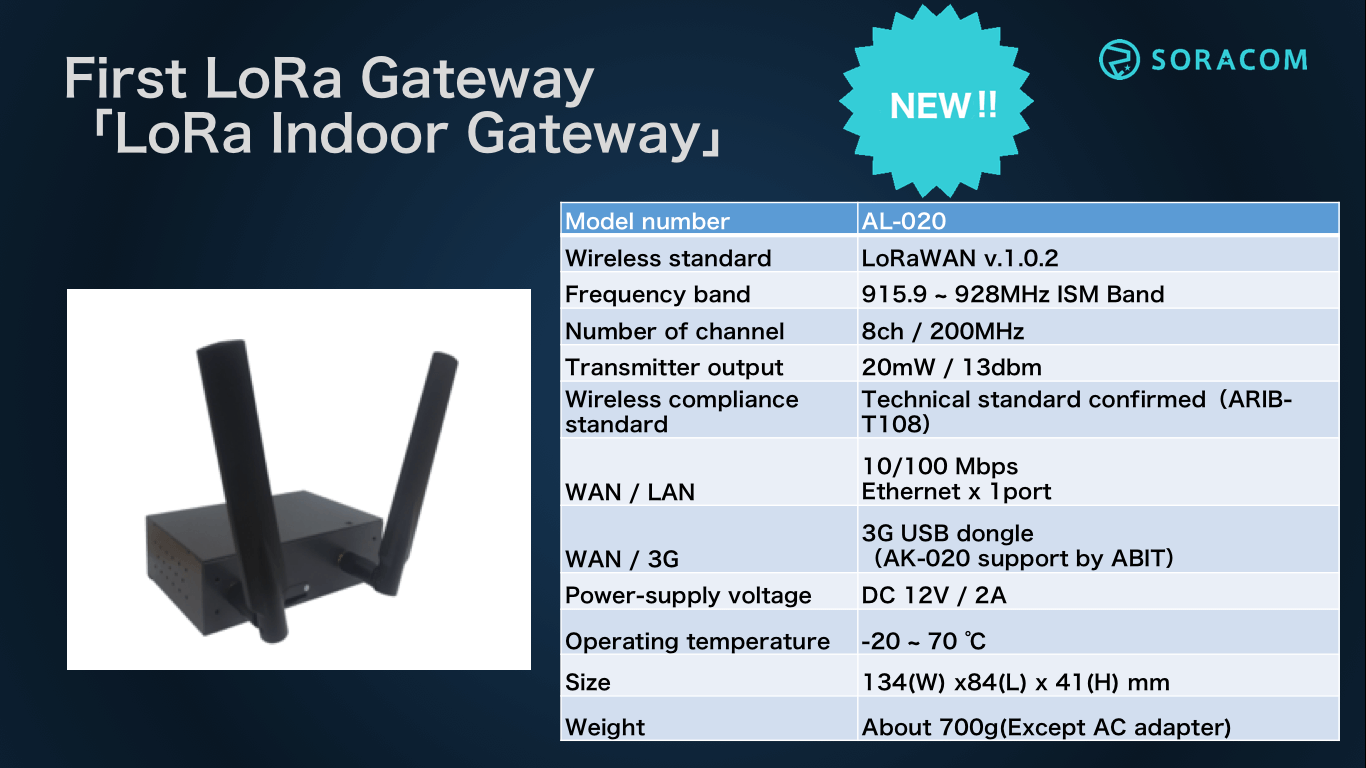 As the first step on the device side, we will begin selling the LoRa Arduino development shield. You can connect to Arduino and develop it. A sketch for development of Arduino will also be released. 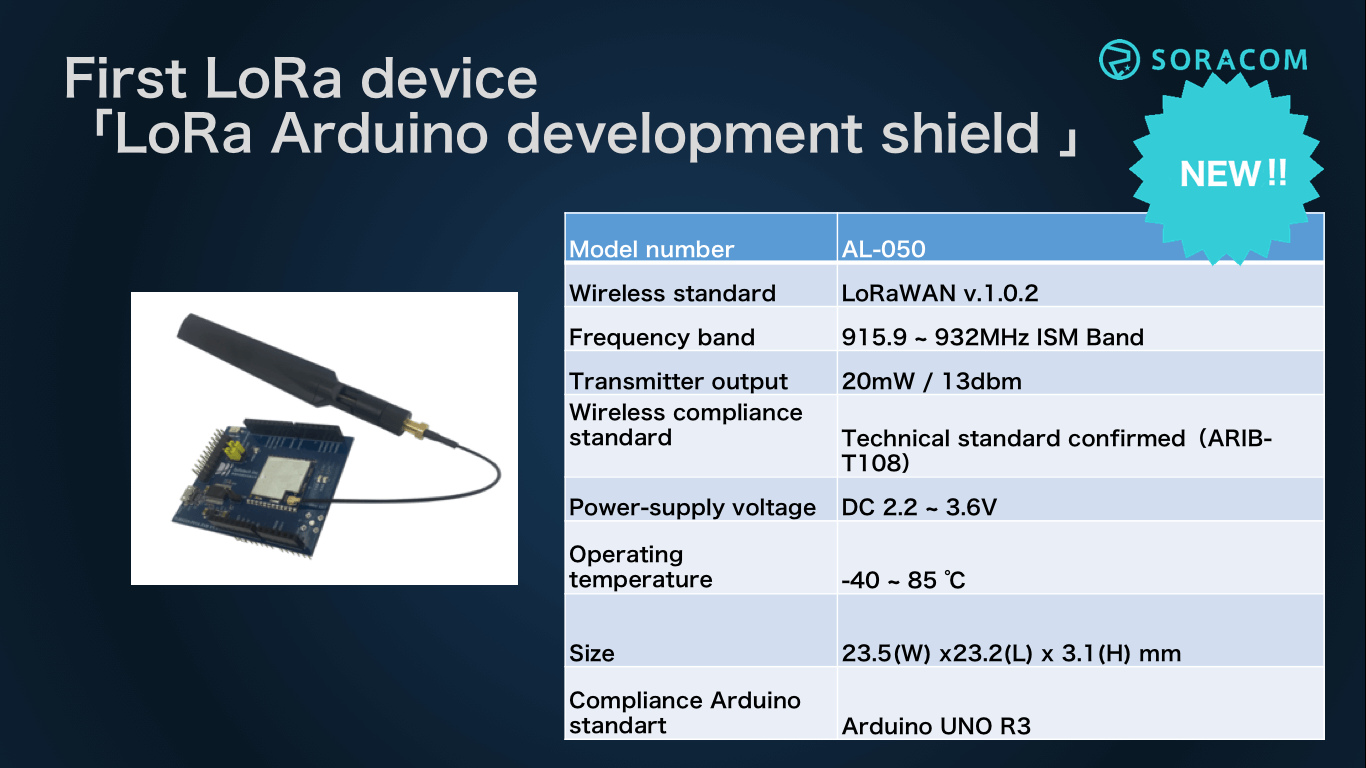 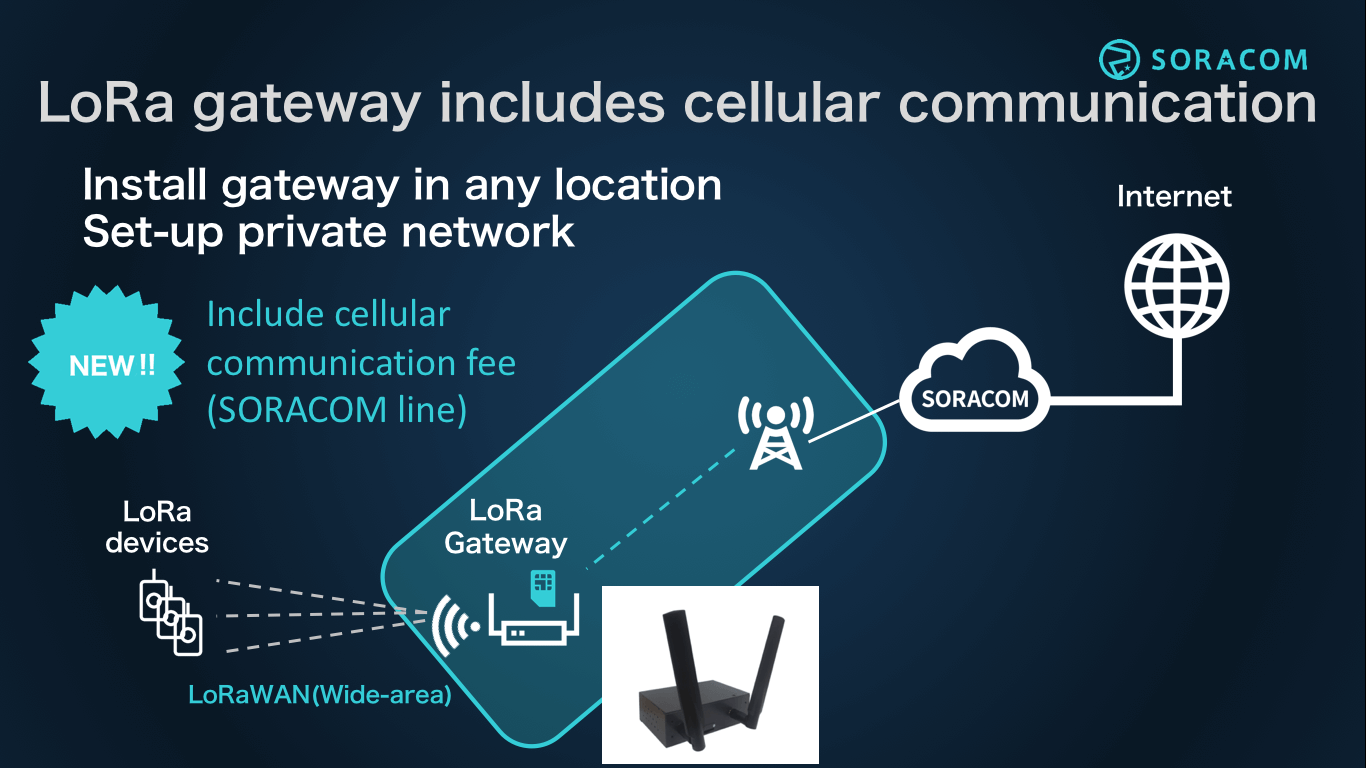 Of course, SORACOM application services such as SORACOM Beam and SORACOM Funnel also support LoRaWAN, so you can easily transfer data from LoRa devices to web services and clouds. 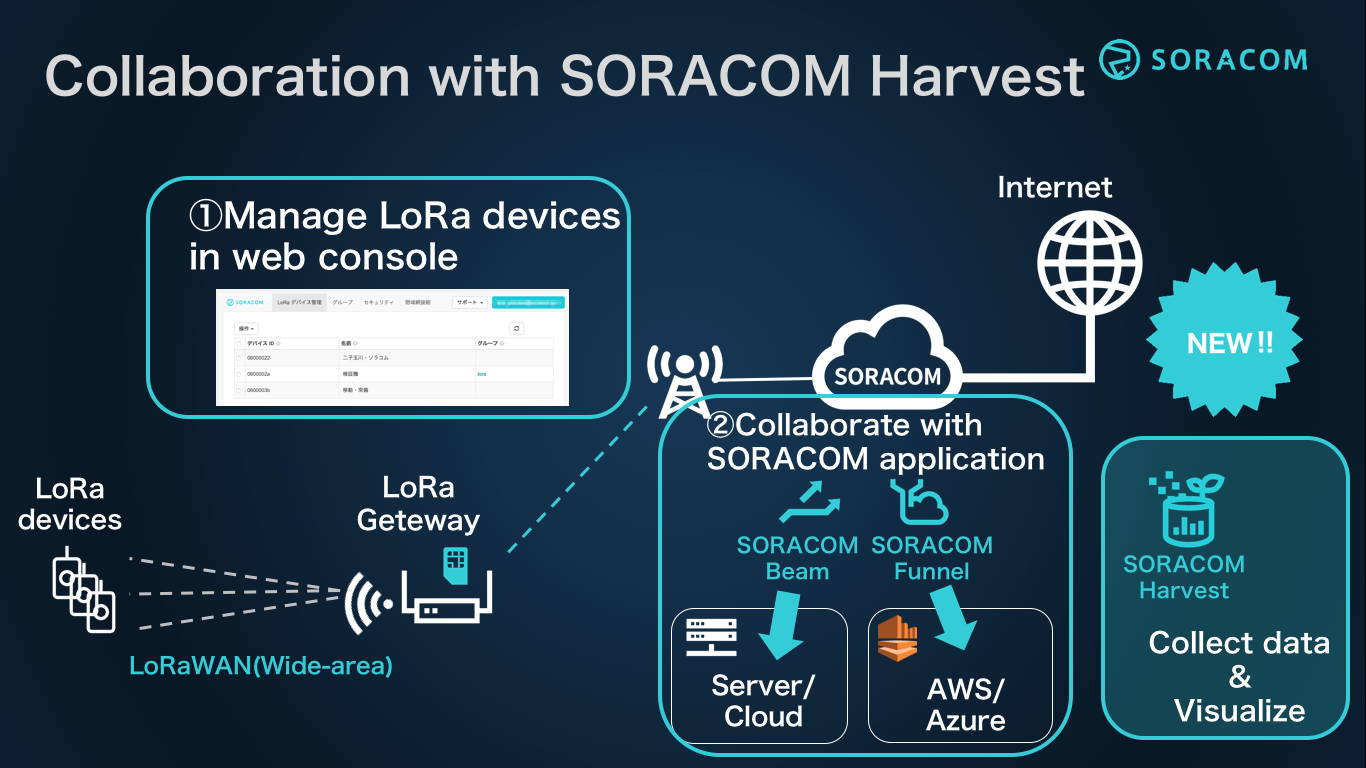 By using SORACOM Beam, you can transfer to LoRaWAN → HTTP / HTTPS, so you can easily transfer data to an existing server or a new server. Also, with SORACOM Funnel, you can link with Amazon Kinesis / Firefose or Azure Event Hub so you can send data directly from LoRa to the cloud.

This time, we also corresponded to SORACOM Harvest. By using Harvest, you can collect and accumulate data in Harvest without building a server etc. And you can do visualization as shown in the graph below.

It is easy to set the data sent from the LoRa device by setting Beam / Funnel / Harvest only from the setting screen below.

For example, when using Beam, you only need to set the destination URL for data sent from the LoRa device. For Funnel, specify the cloud and set it. For Harvest, you just turn on the switch!

How was the announcement of SORACOM platform compatible with LoRaWAN?

Since LoRaWAN is an open standard, it is a technology that anyone can try and enter. That’s really good. In practice, however, there are some challenges. If customers have to prepare all the communication means (ISP, cellular communication) for LoRa devices, gateways, and network servers, plus set up management console / API, it takes a lot of time and effort.

With this announcement, you can purchase and procure devices that have been certified by the SORACOM console, install gateways with cellular communication anywhere, and be able to quickly build private LoRa networks.

Also, to transfer the data sent from the LoRa device to the HTTPS web server using SORACOM Beam, to put data in Amazon Kinesis with SORACOM Funnel, or to accumulate and visualize data with SORACOM Harvest.

The technology of LoRaWAN can send data from several kilometers ahead and it is very exciting to use it, so I definitely want everyone to try them.

From today, customers in Japan can order at the console, we will begin shipping sequentially in March, so please buy it! Also, since we have announced a shared service model aimed at LPWA’s sharing economy, please read that too. It’s a big part of our commitment to growing the Internet of Things and increasing connection in the world.