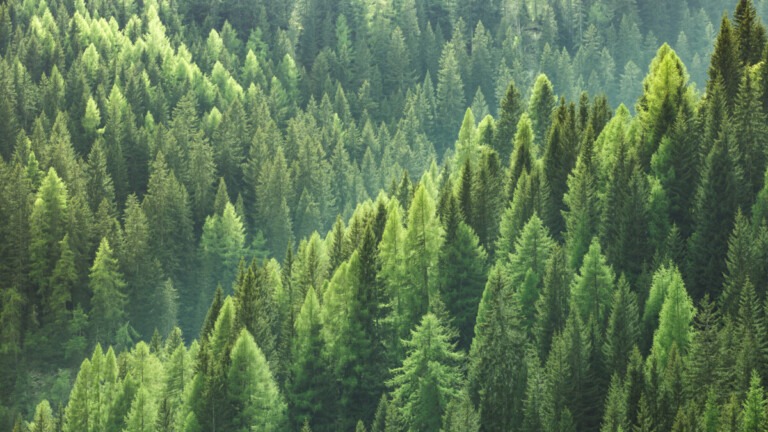 Forests are an essential element to life on earth – one that is on the frontline in the battle against global climate change. Forests absorb greenhouse gases, regulate water flows, and can even help regulate temperatures to some degree, and yet one doesn’t need smart devices to see that they are disappearing at an alarming rate.

It is estimated that we lose around 10 million hectares of forest every year, around one-third of which is caused by fires. This is a global concern, as afforestation efforts are not advancing at an equivalent pace.

To help combat the rate of decline in the world’s forests, organizations across the globe are deploying connected IoT devices to gather the data necessary to predict and address these challenges. Let’s take a look at a few ways smart devices are helping to keep our forests safe.

In order to better understand how our forests are evolving in the face of the climate crisis, a group known as EcoSense has dispersed a number of IoT sensors, drones, and other devices to study the effects of climate change on the interactions between plants, soil and the atmosphere.

The main goal of the project is to study the abiotic and biotic processes of forest carbon and water exchange to observe and map how the ecosystem responds to environmental stressors like heat. To do so, researchers will utilize real-time data from a network of IoT sensors spread throughout several hectares of the Black Forest in Southwest Germany.

The team plans to begin by deploying commercially available devices like carbon dioxide (Co2) sensors and camera-mounted drones, though has announced its intentions of moving into newer, energy-autonomous devices as the project matures.

“We want to measure fluxes of water, isotope-discriminated CO2 and volatile organic compounds and stress markers, mainly photosynthetic efficiency by chlorophyll fluorescence from soils up to [the] atmosphere,” said Ulrike Wallrabe, a professor from the University of Freiburg’s Department of Microsystems Engineering told Eos.

In 2021, there were an estimated 58,733 wildfires in the United States alone, Burning more than 7.13 million acres in the process. The numbers are even more dire in Brazil, home to the largest section of the Amazon rainforest, where more than 184,000 wildfires raged across the country in the same time period. And the problem is hardly unique to these two areas.

In Germany, a country that has seemingly turned a corner when it comes to wildfires in recent years, environmental IoT startup Dryad has begun deploying sensors designed to improve the early detection of wildfires. Dubbed Silvanet, the solution is a collection of solar-powered devices that attach to tree trunks and can detect gas and smoke during the early stages of a fire. By analyzing the composition, temperature, humidity, and pressure of the area, Silvanet can identify a potential wildfire within an hour from the initial spark.

In addition to the sensors, the solution also deploys Mesh Gateways, powered by LoRaWAN, which formulate a network of smart devices (a “smart forest,” if you will) that transmits data via LTE-M or satellite connectivity to a proprietary dashboard.

“It’s clear from the number and intensity of wildfires burning across the world today that there is an urgent need for a solution that can detect wildfires in the smoldering stage before they get out of control,” said Carsten Brinkschulte, Dryad CEO. “With the completion of our Silvanet architecture and device designs, we are on track to achieve our mission of digitizing forests, and combatting wildfires and climate change, by helping to protect the natural world.”

Of course, not all threats are as obvious as wildfires. Pests, such as burrowing insects, degrade wood quality, stem growth, and can even kill trees where they stand. In one Ohio forest, pests and the diseases they carry were responsible for 25% of all trees lost, marking a substantial risk for forests with invasive species of insects.

Facing declining tree populations due to growth in the population of pine weevils, researchers in Scotland have turned to IoT solutions to help track, monitor, and control the number of these bugs that live in its forests. To do so, researchers have positioned several traps throughout the forests of Scotland that are outfitted with cameras that utilize AI to measure the population density of the pine weevil within the area.

“What we’re trying to do is replace an existing manual and labor-intensive monitoring approach,” David Loughlin, director at Sentomol, told UKTN.

Connecting the Internet of Trees

Data is perhaps the best weapon in the ongoing battle against global climate change. By deploying smart devices in the areas most impacted by shifts in climate, researchers are able to track, monitor – and potentially anticipate risk factors before they can create potentially catastrophic situations.

Of course, many of the areas most affected by climate change (such as forests) are fairly remote. This means that efficiently retrieving data requires secure, reliable connectivity. Whether it’s a low-power option like LoRaWAN or cellular connectivity, Soracom Air is a solution that can keep an entire network of smart devices connected.

To learn more about how Soracom Air can help power your project, speak with us today!