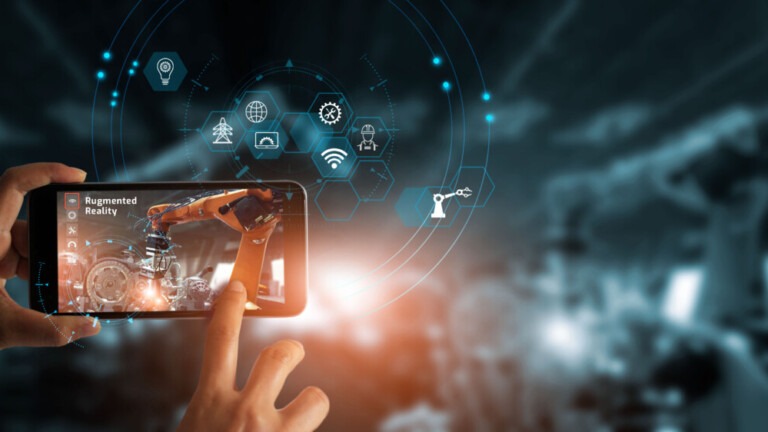 When it comes to the IoT, augmented reality (AR) is a great way to display data being fed back from a network of devices. Though this information can also be displayed on more specific equipment (like AR-enabled smart glasses), the fact that users can interact with AR on more widely-adopted devices like smartphones or Internet-enabled tablets makes it easier to deploy to the broader IoT landscape.

AR applications can be a boon to frontline workers by displaying data from sensors that measure, for example, the temperature of a particular machine, pressure inside tires, or the level of a liquid or gas in a tank. An example of this is a mobile app that allows utility workers to visualize underground pipes and lines using AR. Workers can find what they’re looking for, and use data drawn from IoT devices that has been processed through an AI engine to decide whether it needs maintenance or repair.

This is one of the ways industry is digitally transforming processes to make them more efficient and effective.

The use of AR in IoT supports goals many companies are adopting as part of their shift to Industry 4.0. This approach to business prioritizes smart automation, digital transformation, and increased interconnectivity, and is expected to shift the way the global economy works.

AR in IoT is one key way companies are digitally transforming manufacturing processes. From asset locating to tracking real-time data across a factory floor, AR overlaid on physical objects within the industrial space can transform the way manufacturers function.

In warehouse environments, too, AR has great benefits. For example, AR eyewear can provide order pickers with the barcodes of objects they need to select and ship, or the aisles in which they are located. AGC Corporation deployed smartphones and wearable glasses to their floor teams to help the company speed up data collection.

AR can also work with AI and IoT by displaying data that algorithmic processes have structured in an organized way. That more relevant data is fed back to AR displays, where it can help with problem solving either in the field or remotely.

AR applications even help address the challenges that arise when companies collect large quantities of data from IoT devices and sensors. If the volume of data collected is too high, employees may not actually be able to mine it in ways that provide tangible benefits. But AR allows employees to visualize the data, which can speed up their ability to understand it and take action.

The increased speed of data processing through a combination of AI and IoT will also be enhanced by faster network connectivity. It’s one of the reasons why there is so much excitement for broader 5G adoption, as though 4G continues to be the most common cellular connectivity for IoT, 5G’s promise of lower latency could mean even better support for AR in IoT.

This boost in speed could allow AI in IoT to process and react to information nearly immediately, which means the system feeds data back to a real-time AR display with very little lag.

AR can help companies address an emerging demographic shift in some industrial verticals. The world’s population growth is slowing, and with it, the speed at which companies can replace long-time employees and their institutional knowledge. In certain sectors, a higher-than-average percentage of workers are reaching retirement age, and fewer younger workers are coming in to replace them.

Though a necessary evolution in the workplace, the shift to a younger workforce typically results in a less experienced labor pool. workforce. AR-enabled training materials can speed up the onboarding process by enhancing the way in which new employees learn specific equipment. AR in IoT can help support new field employees by layering service manuals and diagrams on top of what they’re seeing at their work location.

Using AR in IoT can also provide workers remote expert input on a new-to-them field process. Ian Hughes, a senior research analyst for 451 Research, described a scenario in which a worker needs to fix a pump. If the worker points a camera on a tablet or phone toward the pump, AR will allow a remote colleague to annotate and draw on the image in-camera to help illuminate the next steps. “It’s like somebody standing next to you, drawing and pointing at something, but they’re doing it remotely,” Hughes told IoT World Today.

A Permanent Shift in How IoT and AR Function

Just two years ago, more than 80 percent of companies surveyed expected AR solutions in IoT to become the norm in the industry by 2025. This intersection of technology is providing opportunities for companies to increase productivity, lower training and operations costs, and better manage the data collected through their IoT networks.

“Industrial IoT…for the past 5-10 years has been…focused on the machinery of the manufacturing process,” Hughes said during an interview with Next in Tech. “And now it’s working out what data makes sense..and there’s also the element now of trying to help enable the workforce to operate and do their job and fix the machines in a better way.”