Offshore oil and chemical plants require constant attention to operate safely and securely. These facilities require frequent inspections to ensure all equipment and processes are operating correctly and efficiently, yet there are considerable challenges to maintaining a consistent human presence onsite.

Transporting crew members to and from these remote locations, typically by boat or helicopter, involves significant cost and presents logistical challenges, particularly in the event of inclement weather. That’s to say nothing of the risks to workers’ safety inherent in offshore oil and chemical plants. 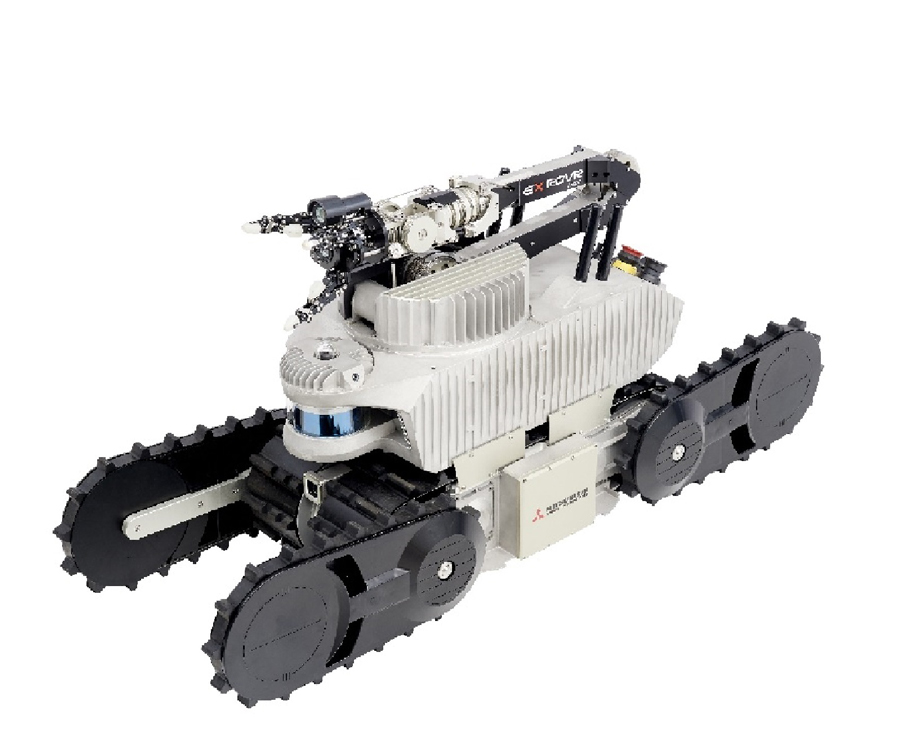 “We chose Soracom because their wide service area covered all of the countries where we planned to deploy the system, confidential information could be securely communicated through a closed network, and we could rely on extensive support.”

Enter the EX ROVR ASCENT, a fully autonomous plant inspection robot developed in 2014 alongside the Eneos Corporation. Though initially designed for the inspection of nuclear plants, the robot’s ability to monitor inhospitable facilities – and explosion-proof design – makes it a natural fit for oil and chemical plants as well.

The EX ROVR ASCENT is relatively compact at 70x45x60cm and can move autonomously around a facility, even traveling up and down stairs to collect audio and visual data. Among its many capabilities, the ROVR ASCENT features a microphone and several cameras attached to the end of its pneumatic arm, a thermal imaging camera that can measure the temperature of tanks and other sensitive equipment, as well as a sensor that measures gas concentration. The data drawn from these sensors is transmitted to the cloud, where it can be viewed by an operator to perform inspections and, in some cases, determine abnormalities.

The EX ROVR ASCENT can perform inspections for up to two hours on a single battery charge, which, though insufficient to cover 24 hours of inspections on its own, can provide 100% uptime when paired with a second unit. This allows for more frequent inspections and more robust data collection. Though it currently serves purely for reconnaissance purposes, there are plans for future iterations of the EX ROVR ASCENT to be able to decide when and if inspections are required autonomously.

The EX ROVR ASCENT was created to be both remotely piloted and act autonomously. This would require designers to build a system where communications could be switched between the robot and the teleoperation terminal for remote control, and between the robot and the server for autonomous operation. Yet the considerable expense and time involved in the architecture of such a system led Mitsubishi Heavy Industries to shift toward architecture built around AWS – where similar functions and services were readily available.

Because MHI’s Equipment Design Section was the first group within the company to use cloud computing resources, there was some uncertainty around how best to process and store data. The designers sought a partner that could help process and store data, while also enabling remote access to deployed robots. Beyond that, the potentially sensitive nature of the data recorded from oil, gas, and nuclear plants put security at the forefront of these considerations.

In Soracom, Mitsubishi Heavy Industries has found a partner that not only provides secure and reliable connectivity to devices in the field but one with a support structure dedicated to helping them grow and scale their IoT operation.

Though the Soracom platform is largely built with developers in mind, the company also offers support services designed to help companies new to the space build a better product. Soracom’s IoT experts were instrumental in the early design stages, helping to create a unique architecture for the EX ROVR ASCENT that addresses all of its operational challenges.

“We chose Soracom because their wide service area covered all of the countries where we planned to deploy the system, confidential information could be securely communicated through a closed network, and we could rely on extensive support,” said Naoki Mizuno, of MHI’s Equipment Design Section. “It is very reassuring to have a partner that so thoroughly understands the innermost workings of the EX ROVR ASCENT, and gives us appropriate advice.”

That support structure was key in the Ex ROVR ASCENT being completed within its forecast window and remains a vital part of MHI’s ongoing deployment of these robots.

“By using SORACOM to handle all communication between the robot, remote control terminal, and AWS, we can organize the system structure and reduce the burden of maintenance,” said Mizuno. “I feel that this is a considerable advantage.” The partnership between Soracom and MHI has opened a gateway to IoT for the industrial giant, with Mizuno noting that there has been a lot of interest in deploying IoT solutions both within the Design Group and across the rest of the company.

“There are also many inquiries such as ‘Can Soracom be applied to other products?'” he said. “So far, there have been a few ideas thrown around.”

Over the coming months and years, the company hopes to analyze the data acquired from the Ex ROVR using deep learning, signal processing, and other methods, then develop it into a system that can better detect, predict – and potentially address –  any abnormal events in these sensitive facilities. The key to their future ambitions appears to lie with the data drawn from their growing fleet of IoT devices.

“In addition to anomaly detection, we would also like to focus on how we can create more value from the data collected by sensors,” says Mizuno. “The world is shifting toward the cloud, which has the advantage of consolidating data in one place. This will make the use of data more valuable.”