Capturing moments as they happen

According to the United Nations, social entrepreneurs will play a key role in moving forward the world’s 17 sustainable development goals. IoT technology serves a pivotal role in accelerating humanity’s progress towards these objectives.

To fulfill this world-changing potential, founders and their teams will need effective tools to help carry them through prototyping to full product deployment. In other words, IoT developers need to walk before they can run — which can be a challenge without the right hardware and connectivity infrastructure.

For inspiration, consider the story of Jaime Macias, Creative Director at studio black and founder of Lensley Studio, who created Lensley, a freestanding, unenclosed photo booth kiosk that autonomously captures studio-quality images. An artist by training, he didn’t set out to become an entrepreneur, but his compelling vision for an experience no one else could create led him there.

“I’m a tinkerer,” says Macias. “I’m happiest when I’m prototyping. My office is filled with tools to make things real that don’t exist yet.”

Macias graduated from USC with a BFA in photography and design, which led him to towards a career in advertising. After a few years delivering for clients during the early days of social, he identified an unmet need and developed a white-label social network for brands. As part of that effort, he recognized that user-generated content would represent a key element within brand storytelling. 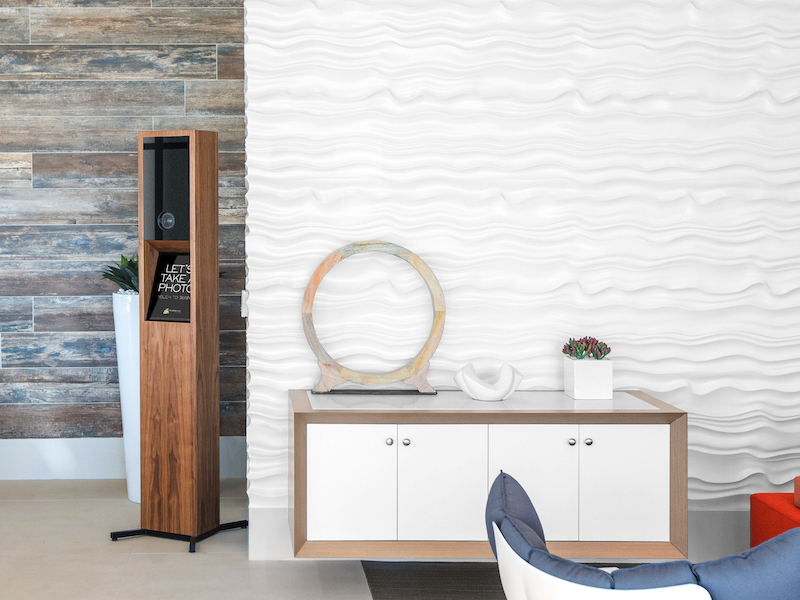 We chose Soracom after years of using traditional network providers and being overcharged for SIMs and services. Soracom’s low-cost SIMs and pooled data across all connected devices make it easy to scale and grow efficiently.

Given his background in the arts, Macias has always been drawn to the places where technology and the human experience intersect. Beginning with its initial deployment in the context of promotional events around Los Angeles, the Lensley photo booth now supports a larger vision to help people capture and commemorate their moments of purest joy.

“I looked at what I had around me — which was a lot of camera gear from my time as a student as a photographer,” says Macias. “So I decided to build a self-operating photo booth, using our office as a test site.”

That was in 2007. The Lensely brand was launched in 2009 and now represents an entire suite of tools offered by studio *black* where Jaime serves as VP and Creative Director. Macias and his team have deployed more than 100 Lensley devices for clients of all types including museums, retail spaces, public events, private functions, sporting venues, and varied places where memories are made.

“Right now, Lensely communicates with the Internet as a professional photo studio in a box that’s less than three square feet,” says Macias. “But we’ve also built Lensleys out of phones and tablets, Lensley that take pictures of your shoes against a green screen and put you on the surface of the moon. What’s been timeless about what we’ve created have been the moments that we’ve captured — the very real giggles, kisses, high fives, and goofy moments that include, yes, people mooning the camera. It’s always been about making peoples’ lives a little bit better and happier.”

Over the last 11 years, Macias has focused on making Lensley sleeker, more powerful, and more reliable.

“We’ve built many different versions of the Lensley — and will continue to create more,” says Macias. Every single component that could break has broken. Every piece that has needed to be replaced has been replaced. All the things that haven’t worked for us along the way, we have pruned and removed. Each new interaction of the Lensley has been more reliable.”

One of the biggest challenges that Macias has navigated has been ensuring reliable connectivity. Given that Lensley is frequently deployed in remote settings or in temporary locations where connection to Wi-Fi may be difficult, he quickly recognized the need for a cellular option. Almost as quickly, he also realized that he and his team were spending too much on Lensley’s cellular bill.

“I thought, ‘there has to be something better than this,’” explains Macias. “We started experimenting with the Teltonika routers because they offered the right connectivity options in a reliable package at a fair price. Teltonika gives us the options we need in a package no bigger or more expensive than necessary. We chose Soracom after years of using traditional network providers and being overcharged for SIMs and services. Soracom’s low-cost SIMs and pooled data across all connected devices make it easy to scale and grow efficiently.”

Previously, Macias had tried many other SIMs and M2M modems. He had tried corporate accounts, personal accounts, and WiFi. But none of these solutions were stable or reliable enough to support Lensley’s business model.

“Soracom gave me everything that I was looking for and needed,” he says. “I’m no longer paying for what I don’t need. The sales team is accessible. I have stacks of old modems that I no longer use.”

The COVID-19 pandemic has led Macias to take a step back and reflect upon his values as an entrepreneur — to return to the visionary roots that led him to create Lensley in the first place, beyond its current application.

He’s currently building a touchless experience for capturing photographs, so that people can continue to enjoy the benefits of a photographic memory — even when social distancing. In a very now turn of events he deployed a socially distanced Santa photo-op for a drive through experience where families can stand 12 feet away from Santa but still get that iconic photo (with masks of course),

He’s also thinking about using ways to use Lensley for a bigger vision in capturing history in the making.

“I’ve been thinking of keeping a Lensley in a single location for months, years, decades — however long that it may be, to capture how society is changing,” says Macias.

He’s also considering the role of Lensley in society as a whole, determining how to integrate the technology into both live experiences and more traditional retail business models.

“We’ve been in Foot Locker and Sephora at different points in time,” he says. “I could see it in all of these places, where people see potential and opportunity rather than just cost.”

Of course, he is also continuing to tinker in exploring how aspects of the technology, especially connectivity are remixable into new products.

“I care about keeping people safe and connected,” he says. “I’m looking at new opportunities as we go into the future and just continuing to make things that you know, start out as sketches.”