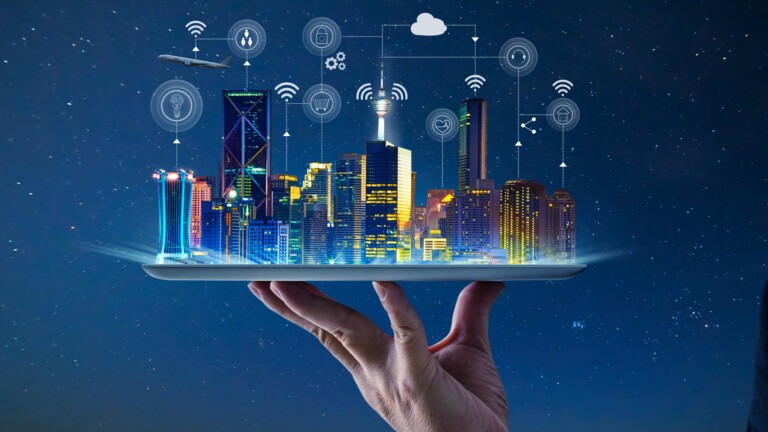 The phrase “Smart Cities” may sound like something out of Tomorrowland, but IoT, M2M, and embedded technologies have already been helping cities operate more effectively for years.  . As hardware, software, and connectivity capabilities advance, the Smart City is now taking shape around us. From developing countries to some of the most thriving metropolitan areas in the world, the idea of a more connected way of life is changing how cities are designed, built, managed, and maintained.

Some efforts, like those of Songdo, South Korea, seek to create sustainable city living without cars, while Toyota’s Woven City sought to create a small professional community that operates entirely on solar and hydrogen power. And while many of these projects are still largely theoretical, the promise they offer has inspired major investments from companies and municipalities alike.

A recent study produced by MarketsAndMarkets predicts that the global IoT in smart cities market will grow from a valuation of $130B USD in 2021 to $312B USD by the year 2026. This growth, which represents a compound annual growth rate (CAGR) of 19% over the next five years, is built largely on the back of devices powered by cellular connectivity. In fact, the report identifies the telecom sector as having played a vital role in the support of an increasingly digital infrastructure during the ongoing COVID-19 pandemic.

One of the major sources for increased use of IoT in smart cities comes from the smart utilities market. The digital water market, for example, is expected to reach a valuation of $19.43 billion by 2028, driven by smart solutions such as the various atmospheric and environmental sensors employed by Thurston County, Washington. Similarly, the market for smart meters, like those employed by Japanese gas company NICIGAS to monitor residential fuel consumption, is anticipated to reach a valuation of $29.8 billion by 2026.

Smart transportation is also growing, with the highest individual CAGR of any sector studied in the MarketsAndMarkets review. The segment itself is predicted to reach $33.6 billion USD in valuation by 2028. As vehicle ownership ebbs in the face of a more connected future, micro-mobility solutions like Beyond make traversing the urban landscape more efficient, while solutions like OpConnect‘s EV charging stations make it easier for electric vehicles to stay on the road.

What the Future May Hold for Smart Cities

With increased investment comes increased speculation about the future of smart cities. To this end, SmartCitiesDive recently sat down with several leaders from the smart cities industry to discuss what kinds of challenges and advancements we may see in the new year.

One of the major factors that look to shape the future of IoT in smart cities is an increased emphasis on sustainability. Kate Frucher, managing director of The Clean Flight, highlighted Ithaca, New York’s ambition to make its buildings carbon-neutral by 2030, as a move that more cities should follow.

“To achieve these ambitious and essential goals will require the end of piecemeal actions and a move towards integrated and packaged solution sets with built-in financing,” Frucher said.

Numerous respondents also highlighted the increased risk of data breaches and malware attacks that can come from the growing adoption of smart cities technology. Though cyber security is a paramount concern for smart city developers, the continued attacks on municipal bodies suggest that security experts will need to remain vigilant in the face of evolving threats.

Mike Wiseman, VP of public sector at Pure Storage, proposed that the industry prioritize encryption and redundancies as a means of weathering any potential attacks.

Other predictions suggest that increased adoption of smart technologies could help civic infrastructure, provoke a similar investment in wireless power systems, and advance the availability of transportation solutions such as e-bikes and scooters, electric vehicles, and even driverless cars.

Of course, new technologies will help power these smart cities toward their goals, and few look as promising as the “digital twin”. As the name suggests, this technology creates a digital duplicate of a physical asset or ecosystem that takes in real-time data, uses advanced AI and machine learning to gain insight, and can test this virtual infrastructure against various likely (or unlikely) scenarios in a contained setting.

The power of digital twinning lies in its ability to provide a thorough simulation of existing infrastructure, which allows developers to better plan, anticipate, and address the challenges that a smart city can face. The technology is expected to be rolled out to as many as 500 cities within the next three years, and could lead to greater optimization of smart city infrastructure.

Using real-time 3D models of a municipal environment allows the city to pre-emptively test responses to scenarios like natural disasters, test progressive design principles for new developments, and evaluate cost- and energy-saving initiatives before they are ever deployed.

Cities across the globe are embracing smart city technology, though the MarketsAndMarkets report see the greatest investment coming from the Asia Pacific region. Specifically, China, Japan, and Singapore are predicted to lead the world in adoption of this technology. Indian legislators are now also embracing smart tech to help address ecological and municipal challenges.

No matter where these technologies may be deployed, it’s no longer a question of if cities are getting smarter but when, and how smart.